1. Introduction of the Chinese Food Market

China’s most important and most complex task is to produce food to feed 20% of the world’s population from 12% of the world’s arable land. The geographical location of these lands is also problematic:  while 70% of the arable land is located on the North part, the water resources are scare here, but widely available on the Southern part of China, which is not suitable for large scale agriculture.

In the previous years the Chinese government established and operates a far-reaching rural development support system not only supports farming and food production, but to provide sufficient income for the farmers.

The Ministry of Agriculture has issued an Agricultural Strategy of China, which clearly specifies the products which should be fully produced within the country and which are the ones, in which there is place for the imported products.

Generally the basic foodstuff (grain, poultry, pork, egg and vegetables) are the ones which should provide self-sufficiency, over 90%. Rice, soybean, sugar, beef and dairy products are considered to consume to much water or feed, therefor are to be imported in a higher rate.

The fastening urbanization process and the gradually changing eating habits are leading to higher consumption of meat and dairy products, while amount of the rice and vegetables will decline. The import will continuously grow in these areas.

Due to the size of the country and the huge income-gap between the Eastern and Western parts is it impossible to draw a unified picture: in the big Eastern cities, like Beijing, Tianjin, Qingdao, Shanghai and Shenzhen) there is already a big population using and eating western style food with high monthly income, while in the Western part of the country, these products are not known, the taste is still very local.

Currently China faces new challenges: the productivity is not high, the local production is expensive and due to the small size farms, the mechanization is low and the education of the farmers also prevents form development.

Hungary and China has active working relationship on several areas: the coordination mechanism of the science and technology cooperation has been established, the technology transfer is supported by the joint transfer center and the companies also play a significant role in the trade of the agricultural products.

During the visit the parties agreed on establishing a virtual agricultural science and technology center and the foundation of a Central European office for CCIC in Budapest.

According to these agreements: In November 2012 the Science and Technology Center was officially opened. The Center is coordinated  by the Szent István University and the NARIC from the Hungarian side, and by the Academy of Agriculture and Animal Sciences of Inner Mongolia from the Chinese side; in 2013 The CCIC Eastern Europe Ltd. was established, which is operating based on the guidance of the General Administration of Quality Supervision, Inspection and Quarantine (AQSIQ) and Certification and Accreditation Administration (CNCA) in specific audits and inspections.(e.g. in the food sector the company can only provide information, inspections and accreditations are handled by the Chinese Authorities. 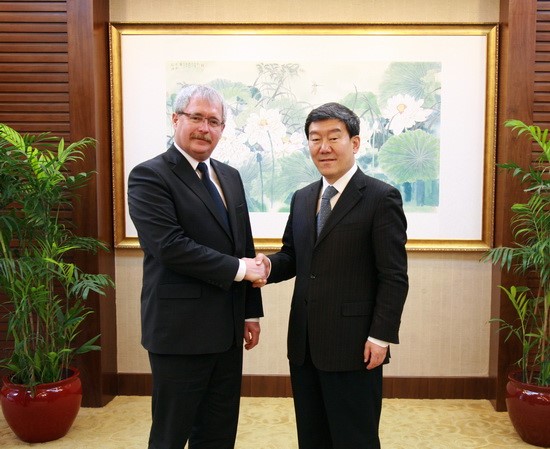 Mr. Han Changfu, Minister of Agriculture had a meeting with Mr. Sándor Fazekas during his official visit to Hungary. Among the several points of discussion, an agricultural Action Plan was signed, which provides a framework for agricultural cooperation. 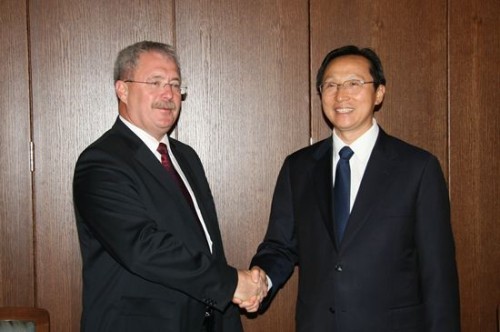 During his visit Mr. Han Changfu also had a meeting with the Dean of the Szent István University, In Gödöllő. 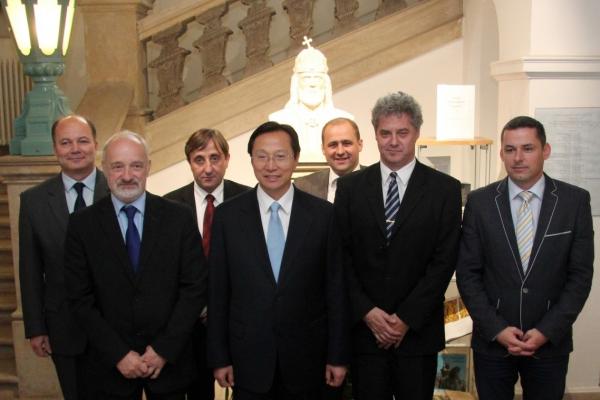 During his visit, Mr. Sándor Fazekas was a honorary guest on the Prowine exhibition in Shanghai, meet representatives of Shanghai city council and in Beijing had a meeting with Mr. Zhi Shuping, Minister of General Administration of Quality Supervision, Inspection and Quarantine and Yang Shaoping, Vice Minister of Agriculture.

In the Ministry of Agriculture, Mr. Fazekas, announced that Hungary would like to organize the “10. Agro-trade and Economic Forum between China and the Eastern European Countries” which would be connected to OMÉK, the National Agricultural and Food Fair.

During the visit in the General Administration of Quality Supervision, Inspection and Quarantine, MR Fazekas and Mr. Zhi reviewed the status of the current matters and signed the Protocol for export of frozen beef. 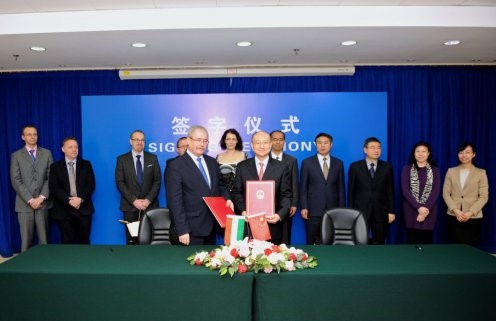 September 2015 – Mr. Qu Dongyu visited Hungary and participated on the 10. Agro-trade and Economic Forum between China and the Eastern European Countries 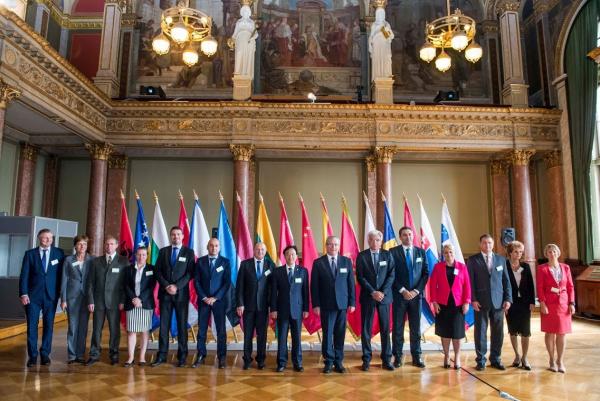 On 22nd of September, 2016, Sándor Fazekas, Minister of Agriculture of Hungary and Zhang Qinrong, Vice Minister of AQSIQ have signed the Memorandum of Understanding on Food Safety Cooperation, the export protocol for live horses and dairy products. 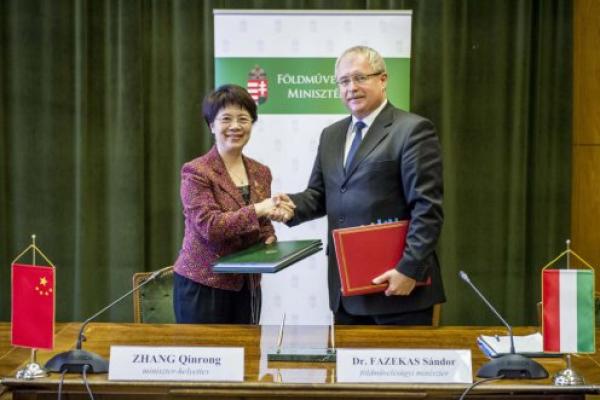 Ms. Andrea Gulyás, state secretary of the Ministry of Agriculture during her official visit to China participated on the opening of the Hungarian pavilion at the West China Fair, held meetings with provincial and city leaders and represented Hungary at the China -  Central Eastern European  countries ministerial forum. She had also meet with Mr. Han Changfu, minister of agriculture of China.

The official visit ended in Shanghai, where she participated on the opening ceremony of ProWine exhibition and visited those stores which are selling Hungarian products. 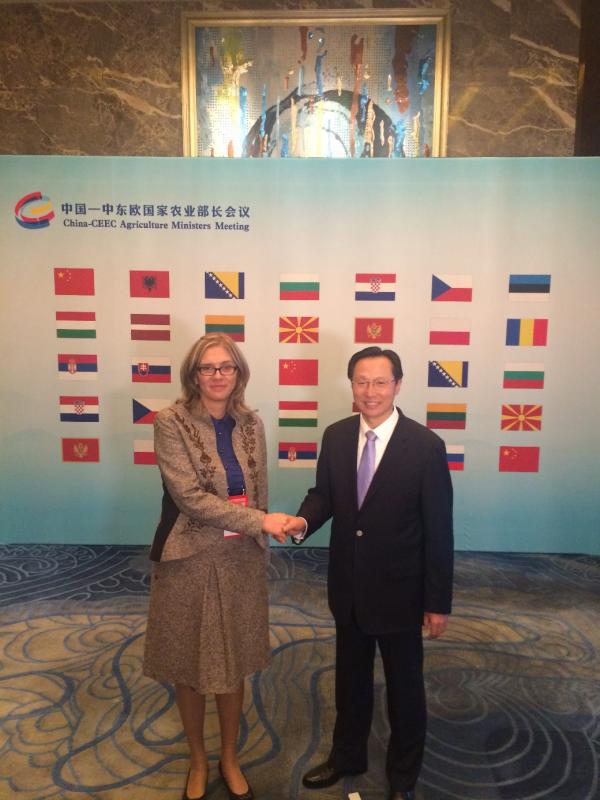 The import of products with animal and plant origin is regulated by the General Administration of Quality Supervision, Inspection and Quarantine.

General rule is, that the less processed the food is, the more complicated and strict the procedure is.

Export of other foodstuff (no AQSIQ permission is needed)

4. Hungary has signed bilateral protocols and therefore entitled to enter the following products:

Since March 2015 all poultry products (including the processed meat and liver products) are banned from the Chinese market due to the Highly Pathogenic Avian Influenza outbreak. Thus none of these products can be exported to China until the ban is not lifted by the Chinese Authorities.

The bilateral protocol has been signed but the company registration is pending:

The list of the companies approved for the Chinese market can be found at the following link: